New Book: They Stand Beside Us - The lives of Old Colcestrians who died in the Second World War 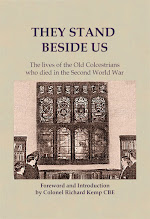 I can highly recommend this recently published book, which tells the story of 73 former pupils and staff of Colchester Royal Grammar School who gave their lives during the Second World War.  E.J. Rudsdale was a former CRGS student and many of the names of the fallen appear in his journals.  The book is a very well researched account and a fitting memorial to those who lost their lives.  The contributors are Neil Brinded, Michael Green, Laurie Holmes, Col. Richard Kemp, Peter Rowbottom and Paul Ma.  Copies can be purchased from the Old Colcestrian Society.