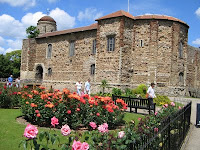 The town’s museum was transferred to the Castle in 1855 to provide space for Colchester’s growing archaeological collections. The Castle Museum opened to the public in 1860. Eric Rudsdale joined the Museum staff in 1928.  During the 1930s, the Castle Museum witnessed a period of expansion as the Museum authorities embarked on a series of major archaeological works in Colchester and instigated the re-roofing of the remains of the Norman Castle in 1935 to provide an enlarged museum.

During the Second World War, the Castle's Roman foundation vaults were requistioned as an air raid shelter and Eric Rudsdale became responsible for superintending the shelter and for undertaking firewatch duty at the Castle, in addition to his curatorial duties and his work for the Essex War Agricultural Committee from 1941. 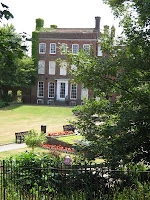 Hollytrees Museum
In 1927 the Museum authorities acquired Hollytrees Mansion, a Georgian townhouse on the edge of Castle Park, and this was opened as a social history museum in 1929. Eric Rudsdale was closely involved in all of these museum developments in the inter-war years.
During the Second World War, the first floor of Hollytrees Museum was requistioned as offices for the Essex War Agricultural Committee (Lexden & Winstree District) and Eric Rudsdale was seconded from the Museum Service to the War Agricultural District Committee as its secretary in 1941.

Both museums remain open to the public today and in more recent times Colchester Museums Service has expanded to incorporate the Natural History Museum in All Saints Church.

Bourne Mill, Colchester
Bourne Mill was built in 1591 as a fishing lodge and was later converted to a watermill. Much of the mill machinery, including the waterwheel remains. The property is owned by the National Trust, who acquired it in 1936 after members of Colchester Civic Society including Professor Lionel Penrose and Eric Rudsdale campaigned to save it. Through the war years, Rudsdale maintained a watch over the building on behalf of the National Trust and stabled his horse, Bob, there. Bourne Mill is open to the public.

Eric Rudsdale's parents rented one half of 'Gordon Villas', Winnock Road, in the New Town district of Colchester. The family had moved there in 1917, when Eric was 7 years old.  Eric Rudsdale's parents were still living in the house during the Second World War and he frequently wrote that he had 'called in at home' to see them in his journal accounts.  The Rudsdale family had always lived in the New Town District of Colchester.  Eric Rudsdale was born in Harsnett Road and his mother's family had lived in Wimpole Road.

Lawford, Essex
Eric Rudsdale moved to the village of Lawford in Essex in May 1942, where he lodged with Matthew and Joy Parrington who farmed at Sherbourne Mill, not far from Lawford Parish Church.
Posted by E J Rudsdale at 09:49

Do you happen to know in which street in New Town E.J. Rudsdale and the Rallings lived? Probably not far away from us: we lived on the corner of Gladstone Rd. and New Town Rd.

The Rudsdales were only living one street away from you! They rented one half of 'Gordon Villas' in Winnock Road between New Town Road and Wimpole Road. They had moved there in 1917. The Ralling family lived opposite the Rudsdales in Winnock Lodge. I think Winnock Lodge has since been demolished and replaced by flats.
E J Rudsdale was born in Harsnett Road and his mother's family had all lived in Wimpole Road so they were very much a New Town family. Thanks for your query, CP