And so this year ends, a year which began so well and ended in such tragedy. However, whatever happens, nothing can take away the joy and pleasure I had at the Royal Show in July [when Eric staged a historic farming exhibition - click here for more information]. I don’t suppose I shall ever have such a chance again, but I have had it once.

What will be the outcome of the present terrible state of affairs I cannot imagine. Some people think the Germans will attack in France at any moment, although considering that this is the worst winter for a quarter of a century I should not think it very likely. Meanwhile we carry on with our ordinary work as if our lives still stretched before us. There are no air raids, as we were so faithfully promised by the Government. The ARP workers are very despondent.

My only personal worry is that I shall be taken for the army. If that should happen I really don’t know what I shall do. However, it seems that only men under 25 are really wanted and I am still in a reserved occupation as a Local Government Official.

The general atmosphere is gloomy. Most people hope the war will be over next year, although they don’t really believe that it will be. A few think it will go on for ten years, and will involve every country in Europe. Some hope that the Russians will join with the Germans in a military sense, as they believe the Russians to be so incredibly incompetent that their aid would be a liability rather than an asset, but I cannot see why an additional 170,000,000 enemies should be an asset to this country. At the moment the Russians are pilloried in every paper for their attack on Finland, and there is a great agitation for an expedition to help Finland.

The weather is quite amazing. I have never seen such snow since 1916. What must it be like in France? Many villages round Colchester have been quite cut off.

Russian troops had marched into Finland in November 1939 on the pretext that this would strengthen the Soviet Union's borders and act as protection against possible German aggression. After resisting the Russians for some months, the Finnish Government finally had to accept Russian terms in March 1940.

The National Service (Armed Forces) Act 1939 had imposed a liability to conscription on all men aged 18 to 41. However, the call-up proceeded slowly at the start of the war with conscription being determined by age and occupation. As Eric remarks, only those aged between 20 and 23 were called-up initially. Local Government officers, such as Eric, were considered to be in reserved occupations at first although they often undertook Civil Defence duties in addition to their full-time jobs. By 1942, however, all men between 18 and 51 and women between 20 and 30 became liable to call-up.

Eric's fears that he might be drafted into the army were compounded by his support for pacifism and concerns about the state of his health. As he wrote, with characteristic humour, to his friend Hervey Benham in 1940:

I am not at all keen to see the inside of the army, because I know that being unfit for general service I should only be put on peeling potatoes and cleaning out the lavatories, occupations which I think would soon pall.
Posted by E J Rudsdale at 07:33 No comments:

The Old English Farm Exhibition at the Royal Show, 1939

Eric Rudsdale was invited by the Royal Agricultural Society to stage a historic farm exhibition at the Royal Show in July 1939. The invitation arose from his success in creating a number of historic farm exhibitions at the Essex Agricultural Shows between 1932 and 1939. Eric's exhibitions were pioneering for their time because he created 'living exhibits' showing the Museum's agricultural collections in a recreated historic farm setting, outside of the Museum itself. Visitors to the Show were encouraged to handle the exhibits and to record their memories of traditional farming techniques for the Museum's records.

Eric was particularly proud of the 'Old English Farm' he created for the Royal Show held in Windsor Great Park in 1939. It opened to considerable acclaim and Eric was interviewed about his work by the agricultural writer, A G Street, for a BBC Radio outside broadcast. Eric also escorted King George VI, Queen Elizabeth and the Princesses Elizabeth and Margaret around the exhibition. More information on this can be found in Eric's diary entry for 27th July 1940. The photographs below show the scale of the project and Eric's attention to historic detail.

During the Second World War, Eric's agricultural knowledge led him to become Secretary to the Essex War Agricultural District Committee (Lexden & Winstree). More information on his work for the Committee can be found in his diary entry for 6th January 1941 and in his book. 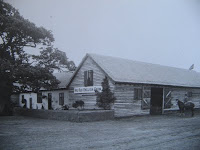 The exterior of 'The Old English Farm', 1939. Eric can be seen riding his horse 'Bob' on the right. 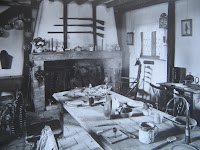 Interior view of the kitchen, furnished in the style of the 1830s with objects from the collections of Colchester Museums. 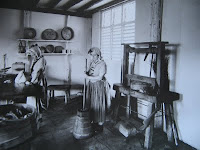 View of the Dairy complete with 'dairymaids' who were agricultural students at Reading University.

(All photographs courtesy of Essex Record Office)
Posted by E J Rudsdale at 07:18 No comments:

Still bitterly cold, and snow fell last night, with more to come by the look of the sky.

This was the beginning of the bitter winter of 1939/1940, which was the coldest for forty-five years. Eric's diary entries in the New Year will be dominated by the additional difficulties created by the snowstorms in wartime - keep following the blog to find out more!
Posted by E J Rudsdale at 07:32 No comments:

Museums shut. Writing at home all day. Tonight to the cinema with Rose.
Posted by E J Rudsdale at 07:31 No comments:

25th December 1939, The First Christmas of the War

Dear old Mother produced the usual huge Christmas Dinner, which we ate with the usual difficulty. ...

Went over to see Daven Soar [a schoolfriend of Eric's] this evening. We went up to the “Leather Bottle” for a drink. Coming back on my cycle I had a bad skid near the Abbey Field and very nearly knocked myself right out, with the result that I now feel rather dazed.
Posted by E J Rudsdale at 07:25 No comments:

Nothing to note nowadays. Vaughan is bringing the timbers in as fast as he can [from the old house in Culver Street], but there are no other museum activities at the moment. The weather is dark and gloomy and everybody appears very depressed. There seems not the slightest chance that the war will ever stop.

Eric is having to face the reality that the war is not going to be over by Christmas.
Posted by E J Rudsdale at 07:20 3 comments:

In a letter to his cousin, Maitland Underhill, (Honorary Curator of Hambleden Museum), Eric describes how the war is affecting his work at Colchester Castle Museum particularly with reference to displays of wartime propaganda in museums:

I must congratulate you on the announcement in the “Museums Journal” that Hambleden is carrying on as usual. I sincerely hope that you will do, and that you will not have anything to do with this wild suggestion that museums should co-operate with the Ministry of Information in displaying “war material”, “atrocity pictures” and similar miserable propaganda.

On looking up the "Museums Journal" for 1914-1918 I find that the same sort of thing was being done, very largely with the approval of museum curators, although a few sensible men stuck out and maintained that museums were repositories of antiquities, science, natural history, etc., and should not be used for any other purposes.

Here I have already "struck a blow for freedom". As soon as the war began my chiefs ordered than an exhibition should be arranged of all the material we have relating to the last war, German rifles, helmets, food cards, a machine-gun, bombs and other rubbish. As this is all packed away in the most inaccessible places, I was called upon to fetch it out and arrange and label it. This I flatly refused to do.

I consider that it is of the utmost importance that museums should carry on in a perfectly normal manner. I intend to do anything I can to combat what is practically a scheme to turn museums into Government propaganda shows.

I have not had any holiday this year but have not given up hope. Perhaps if I get a week or so off in the New Year I might be able to give you a look in, if you are now free of evacuees.

The moon is dying now, and the nights are black as ink. I am very nearly blind at night, and make my way through the streets full of pushing, jostling soldiers at considerable peril. I wonder if, as the years roll on, people will come to accept these ghastly nights as being quite normal?

Spent the afternoon and evening with Rose as normal.

Eric, like many other people in the early months of the war, was struggling to get used to the blackout, especially as winter approached. The blackout had been imposed on 1st September 1939 and the lack of street lighting or lights from buildings meant that roads became very hazardous at night. In her book 'Wartime: Britain 1939-45', Juliet Gardiner records that 'in the first four months of the war a total of 4,133 people were killed on Britain's roads, and 2,657 of these were pedestrians. Road fatalities increased by 100 per cent compared to the corresponding months in 1938.' (p.52)
Posted by E J Rudsdale at 07:03 1 comment: