On examining the excavations for [air raid] shelters west of the Castle, I find there is a three foot layer of very disturbed soil just below the surface, containing much broken stone, mortar, 17th century pottery and bits of clay tobacco pipes, which I suppose is the debris left after the demolition of the west wall of the Bailey [in the late 17th century].

[The shelters] were excavated to a depth of only 5 feet and the finds were rather disappointing, although they give some indication of when the western defences [of the Castle] were despoiled:

This is one of a number of archaeological finds unearthed as a result of digging for air raid shelters in Colchester. See also Eric's diary entries for 6th September 1939, 21st September 1939 and 29th September 1939.
Posted by E J Rudsdale at 07:19 No comments:

Went to the Tovells’ to supper tonight. Mrs T. is a rather pathetic little woman, terribly worried by the war. They are all leaving Colchester soon, as papa has a job down in Cornwall, building army camps. He used to have a very good business in Colchester, and only broke through sheer hard luck. I well remember his horses going down Magdalen Street in the evenings.
Posted by E J Rudsdale at 07:32 No comments:

Museum Committee. The Doctor got the old house scheme put through without any bother at all. They seemed glad to have such a simple solution to the matter.

I admit this is a very poor second to preserving the house on the site, but what else could I do? I don’t know what Penrose will say, but it is unlikely that he will ever come back from Canada.

Professor Lionel Penrose was the chairman of Colchester Civic Society and Rudsdale served as secretary. Both had campaigned throughout the 1930s to conserve historic buildings in Colchester. Penrose was a renowned psychiatrist, medical geneticist and mathematician and was the older brother of the artist, Roland Penrose. Lionel Penrose had taken up a medical appointment in Canada in 1938.
Posted by E J Rudsdale at 07:29 No comments:

[Mary] Tovell left today. I really believe she was quite sorry to go. She is such a bright, intelligent little thing she will be quite a loss to us. She is going to be a nurse at Erith in Kent.
Posted by E J Rudsdale at 07:45 No comments:

If this was this day 21 years ago the war would be over. As it is, it has not begun.

This morning Harding and I were sworn in as “Specials” before old General Towsey. We all swore to obey our King etc. The General said “Jolly good luck, men” and that was all. We each received a warrant card, but no helmets or other equipment.

Little Tovell is now determined to leave [the Museum], and has given notice she will go next Friday. I shall miss her.

Eric's diary entry highlights the lack of equipment available for those appointed as Special Constables in the first months of the war. In a letter to his cousin, dated 7th December 1939, he describes his duties:

I and two of the Attendants have been sworn in as "Specials", and have to do the best we can to attend [at the Castle air raid shelters when the alarm sounds]. We are considered to be on 24-hour duty, and cannot leave the town without the permission of the Chief Constable. Of course, we don't get paid, not even for going round last thing at night to see that all is well trying lights and keys etc, but there it is.

The whole thing is rather a nuisance, as we have been given to understand that if anything goes wrong during an alarm so that anybody gets hurt, it will be our responsibility. We also have to see that the main gates are kept clear of parked cars, which is no mean job on a dark night. There have been frequent "yellow" warnings up until recently, which lasted well on into the night, with the result that its best to go to bed with your clothes on more often than not.
Posted by E J Rudsdale at 07:40 No comments:

The more I think of yesterday’s idea the more attractive it seems. Vaughan says he would be prepared to do the whole job for £60, very reasonable I think. ...
Posted by E J Rudsdale at 07:40 No comments:

Vaughan came along this morning, and we made a thorough examination of the whole structure as it stands. It suddenly occurred to me that, while there is little hope that the whole place would ever be re-erected in its present form, there is no reason why one bay should not be re-erected forthwith in the Castle Main Hall. There is only one hammer beam actually complete, and that lacks one of the curved braces, and many of the smaller timbers are very rotten and would have to be replaced. In my opinion it would therefore be a much more sensible thing to re-erect only one end bay, using all the best timbers in that section. The whole thing could stand over the Easthorpe fireplace like a great wooden canopy.
Eric's idea of re-erecting the end bay of the Culver Street House in Colchester Castle Museum came to fruition in 1940.  It remained in place in the Castle Museum until 2013 when the refurbishment of the Castle led to it being dismantled and put in store. 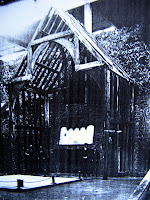 It has now been agreed that Vaughan the builder, who has considerable experience with old timber-framed buildings, shall dismantle the [old] hall [in Culver Street], so I went to see him tonight and arranged that he should inspect the place.

I heard today that both I and Harding are definitely to be Special Constables [at the Castle] and are to be sworn in on Saturday.
Posted by E J Rudsdale at 17:18 No comments:

Took Rose to see the film of the “Mikado” at the Regal [Cinema] tonight. It was really very good, although a little slow at first. The colours and music were excellent. Of course the Gilbert & Sullivan purists are horrified at this “blasphemy”.

This is the first occasion since the war began that Eric mentions visiting the cinema. Since the threat of mass air raids at the start of the war had not materialised, Government orders restricting the opening of cinemas were lifted in full in November 1939. Eric was, therefore, quick to resume his visits to the cinema. Cinema-going provided the public with some form of entertainment and an outlet to escape from the difficulties of the war. Film also became a useful source of propaganda for government authorities. See also Eric's diary entry regarding the closure of cinemas at the start of the war on 6th September 1939.

The film of the 'Mikado' (1939) was the first time that a complete Savoy Opera was filmed for the cinema. The opulent technicolor film had a huge impact on audiences although the film is an adaptation of the original stage production. The D'Oyly Carte Opera Company cooperated in full with the film, providing the chorus and two of the principals, and the film remains an important record of the Company's work at the time.
Posted by E J Rudsdale at 16:32 No comments: