A Brief History of Colchester in Essex 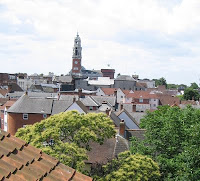 The town of Colchester in Essex lies on the river Colne and has been a place of settlement since the late Iron Age. By the first century BC it had become the tribal capital of the Trinovantian kingdom, and was soon presided over by their powerful ruler, Cunobelin, who was king of both the Trinovantes and Catuvellauni tribes.

When the Roman army invaded the country in AD 43, their objective was the capture of Colchester or Camulodunum as it was then known. The Emperor Claudius arrived to personally take possession of Colchester where he received the formal surrender of several British kings. The town became the first capital of the new Roman province and archaeological evidence of the Roman occupation continues to be unearthed today.

Colchester fell into decline following the abandonment of Britain by the Romans in AD 410 but had begun to grow in importance again by the late Saxon period. After the Norman Conquest in 1066, Colchester witnessed considerable growth. Owing to its strategic importance on the route from East Anglia to London, William the Conqueror ordered the building of a stone castle at Colchester, which was built on the site of the earlier Roman Temple of Claudius.

Colchester prospered from the opportunity to market agricultural produce from the rich farming lands that surrounded the town. The town port at the Hythe also enabled Colchester to conduct coastal and overseas trade. However, by the late 12th century, the town began to specialise in textiles and the arrival of Dutch refugee weavers in the late 16th century helped to continue the manufacture of cloth into the mid-18th century. Another ancient industry was the oyster fishery, which was the property of the freemen of the Borough who carefully guarded the fishing rights.

Colchester suffered several setbacks in the 17th century. Firstly, the town was ravaged by the devastating effects of the Siege of Colchester in 1648 when the Parliamentarian army laid siege to the town after the Royalist forces had entered it. The town was slowly starved over a period of 76 days and when it capitulated, the Royalist commanders were captured and later executed outside the Castle. Then twenty years later, the Black Death appeared in Colchester, leaving more than a quarter of the population dead. Nevertheless, the town quickly recovered and continued to rely on agriculture and the cloth trade for its prosperity.

The town had traditionally served as a gathering point for troops en route to the Continent and the numbers of troops arriving in Colchester during the French Revolutionary Wars led to the establishment of the first permanent barracks in the town in 1794. This created new demands on the town’s services but it was not until later in the 19th century that its traditional reliance on agriculture began to give way to the arrival of new engineering industries. These contributed to a building boom at the end of the 19th century with new housing being provided for the influx of workers. The architecture of Colchester, therefore, reflects its varied historical past with Roman, Saxon and Medieval remains being evident alongside timber-framed buildings, Georgian townhouses, Victorian civic buildings and modern amenities.

By 1939, Colchester had become a large garrison town and its leading industries were engineering (Diesel engines being a speciality), clothing manufacture and rose growing. The population numbered approximately 52,000. The outbreak of war in September 1939, however, posed immediate threats to the town and its inhabitants. Colchester was vulnerable to air attack, owing to the vital role of its engineering industries in the war effort and due to its military importance as a garrison town. The town was also on the flight path for enemy bombers on their journeys to and from London and this often led to stray or unused bombs being jettisoned onto the fields surrounding the town. Finally, Colchester’s proximity to the east coast made it a likely target for invasion. The town was ringed by over 120 pillboxes and other defensive structures which formed part of the Colchester stop-line set up to repel enemy invaders. Therefore, as Eric Rudsdale began to record the events of the Second World War in his journal, he would have been well aware of the threats that this new conflict posed to his home town and to its long history.

For more information on the history of Colchester visit British History On-Line.
Maps of Colchester can be found on the Colchester Museums website.
Posted by E J Rudsdale at 15:54