Went off this afternoon on my cycle to see Clacton. It is a long time since I went so far on a bicycle. I took about 2 hours. It was a lovely spring day. Nearly all the little houses along the St. Osyth Road are empty now.

You have to go to within a few hundred yards of the smash before you see anything, then every house has a few windows gone, and as you get nearer the scene tiles are missing and gardens full of wreckage. The actual house that was hit is just a pile of bricks, and the two next ones are very badly damaged, having one wall quite gone. Thousands of windows are missing in the adjoining streets. Everywhere are lorries and even horse-drawn pantechnicons loading up furniture.

It is a sad scene of desolation and made me think of the days when I drove through these very roads in the yellow gig, Bob arching his neck and titupping along. 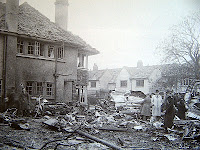 Clacton is I should think about half empty now. There are quite a lot of soldiers about, and most of the houses on the front seem to be taken over by the army.

The beach is quite open, no signs of fortifications like in the last war. The pavilion advertises band concerts by the Cavalry Band from Colchester. Shopping centre looks quite full, and as I got there newsboys were displaying the evening placards, which said “New Call-Up”, giving me an unpleasant feeling.

I came home by way of Jay Wick Lane. Saw Jack Eggleton walking with a young woman near Butlins. (That’s now a barracks, the gardens are still kept very nice). Got home about 7, much slower on the way back. Thankful for a following wind.

See Eric's previous posts on 1st May 1940 and 30th April 1940 for more information on the crash landing of a German minelaying plane on Victoria Road, Clacton.
Posted by E J Rudsdale at 07:00