The news in the papers today seemed a little better, but was followed almost at once with the startling intelligence that the Germans were in Abbeville, miles from where they were expected to be. It is obvious that the BEF are in a very tight corner. There is great consternation everywhere.

In view of the greatly increased danger of air raids and the possibility that the country will soon be invaded, I told Father that he and Mother must move. 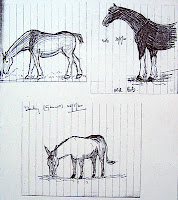 Eric made the following sketches of Bob and the Donkey and another horse, called Nick, at Bourne Mill on this day in 1940 and pasted them into his journal
Posted by E J Rudsdale at 07:00

It's nice to see the picture of Bob and the donkey as their antics are quite often referred to!