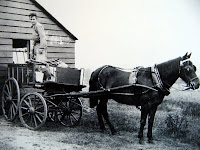 Eric John Rudsdale (seen here in 1934) was born in Colchester in Essex in 1910 to schoolteacher parents, John and Agnes Rudsdale (nee Webb). His father was from Whitby in North Yorkshire, where the family had owned a coach-building business, and this inspired Eric’s love of horses and horse-drawn transport. His mother’s family originated from North Wales and Eric maintained a strong attachment to his Welsh roots.

As a young boy he became fascinated with the history of Colchester and its Roman archaeology and his interest in history led him to seek a career as a museum curator. He gained the position of Curator’s Assistant at Colchester Castle Museum in 1928.

Eric had kept a diary from the age of 10, mainly with the aim of recording his archaeological finds. However, on the outbreak of the Second World War in 1939, he recognised the significance of this moment of living history and his wartime journals were expanded to form a social record of Colchester and its people in the era of total warfare. Eric undertook air raid shelter duties at Colchester Castle and, therefore, had the perfect opportunity to observe the changes inflicted on his home town by the conflict.

Eric’s writing is characterised throughout his journals by his wry observations of wartime officialdom and his lack of conformity with the prevailing views of the time. He was a reluctant participant in the war, partly due to his independent stance and support for pacifism but also owing to his poor physical health, which made him doubt his fitness for armed service. Even as a civilian, however, he found he was unable to avoid the consequences of total warfare because Colchester was a garrison town and a military target. His journals, therefore, reveal moments of real fear, anxiety and personal tragedy, but throughout it all his sense of humour is never diminished for long.

In 1945, Eric was appointed Curator of Wisbech Museum and Literary Institution in Cambridgeshire and also served as archaeological adviser to Scarborough Museum in the late 1940s. He died prematurely from kidney failure following an operation for appendicitus at Wisbech in 1951, at the age of 41.
Posted by E J Rudsdale at 14:33